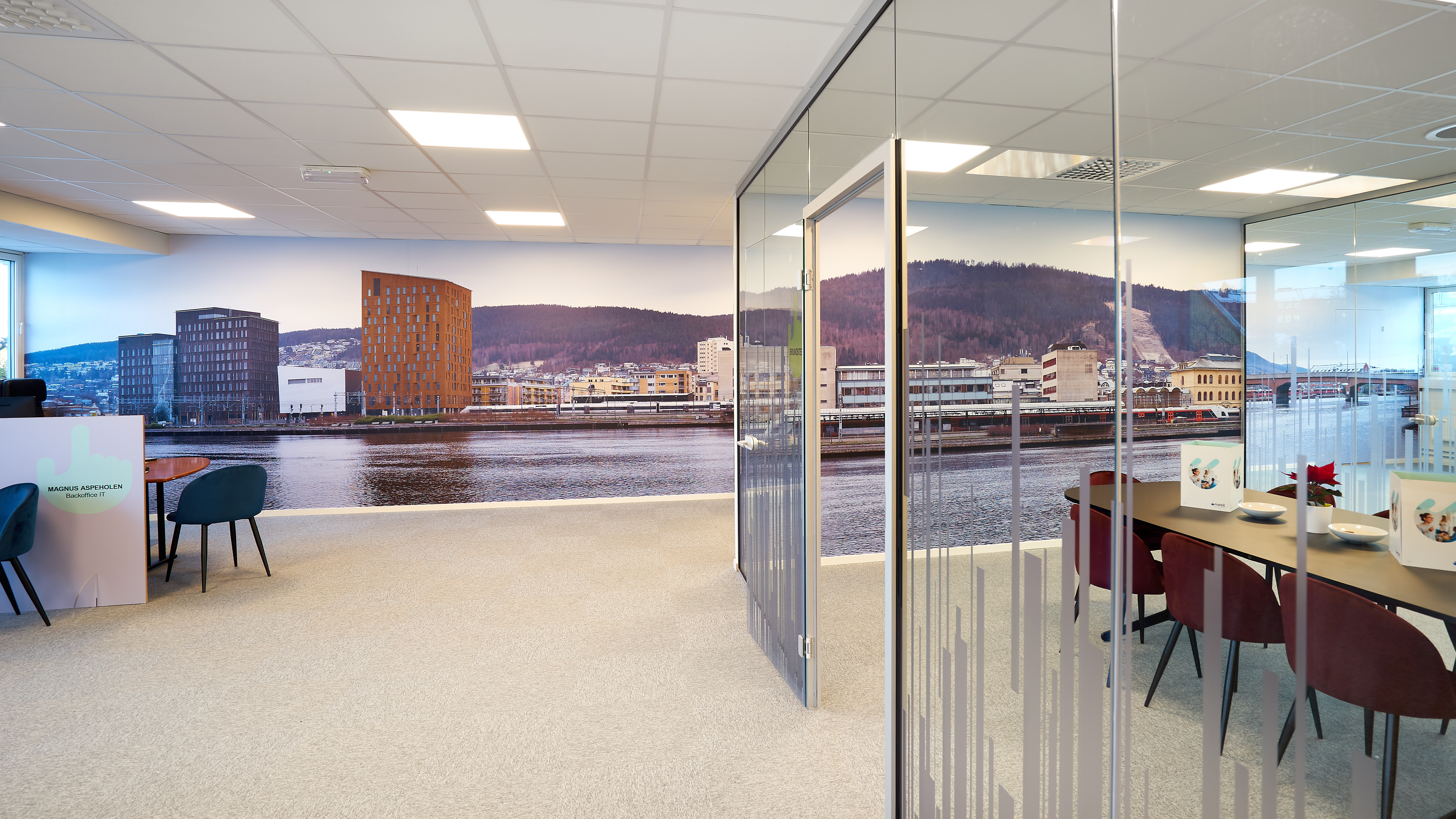 There are big wall art photography jobs and then there are super sized jobs. This one required us to create a super sized panorama for a client. And super sized it was. It was to be printed out at 18 metres long (60ft) and 2.7m high (9ft) and fixed to the interior walls of an office in Drammen, Norway.

We were contacted by Allkopi, a local printing company that we have worked with for some time. They had a client that they wanted us to meet to discuss a new project. Great we said, and the meeting was arranged.

The client, Mobit, had recently moved into new offices and they wanted to create something very special for the office. They wanted something memorable when their customers visited.

A unique piece of wall art photography is what they were looking for. An 18m x 2.7m panorama of the local Drammen riverside was the goal. The image would cover the entire width and height of the office. It needed to be one continuous image so that it created the feeling that one was looking directly at the view. In actual fact the image would be fixed to three sections of a wall as show below.

We were excited at this challenge. We had not produced something as big before but we were keen to get started.

We visited the shoot location and did a test shoot, even though the light was not right for the actual shoot. At this time of year in Norway the sun is very low in the sky and the days are short. And the direction into which we had to shoot was south. We would have to do the actual shoot as early as possible in the day so that the main elements of the scene would not be in shadow.

From the test run, we produced a rough mock up of the panorama so that the client could see what could be included. One of the key elements of the planning was to work out the ratio of length to height of the final image. The length was 6.7 times greater than the height; this was key to working out the crop ratio.

From the mock up, the client could decide the end points of the panorama, so exactly what they wanted included. Part of the scene included Drammen railway station. They wanted the image to have a train standing at the station to create more interest.

When would the sun rise?

We checked the Photographer’s Ephemeris app to see what time the sun would rise. It was also possible to see the exact angle it would rise at the following day. The weather forecast showed that the following day would be the last day for some time before heavy snow would fall. So even though it was to be minus 10 degrees C, I planned to be on location by 7:30 the next morning.

Setting up the camera equipment

The sun rose, hidden by clouds and I was in position to capture the images. I did some trial sets of exposures using the Sony A7II with a 90mm lens in the portrait alignment. The tripod had to be perfectly level. I needed to rotate the camera a few degrees after each frame, if the tripod was not level the horizon and the bank of the river would not have been straight.

All lenses have some quality fall off at the edges. I therefore overlapped each image to be sure that only the centre part of each capture would be needed when the final image was stitched together. In total I determined that I needed 15 images to cover the length of the panorama.

By the time the sun had reached its optimal position I had everything set. I had worked out that trains were stationary for 45 seconds at the platform before they left. This gave me enough of a window to capture all of the 15 images I needed.

The most important thing is to have full control and consistency across all of the images; the camera was therefore set to manual. The focus was set to manual and I focussed on railway station. The ISO was set to 100 to get the best resolution. The aperture to f10 for good depth of field and the shutter speed set to 1/15th second. With a relatively slow shutter speed the camera could be moved slightly when depressing the shutter. To avoid this, I used the 2 second delay on the camera so that I wasn’t actually touching the camera when the shutter fired.

Two hours of standing in the freezing cold, the passers by thought I was mad! Anyway the images were in the bag and I was heading for home.

It took around 15 hours in Photoshop to bring all the images together, carefully using masks and a paintbrush to get the perfect joins. I checked and double checked each stich; there couldnt afford to be any errors. I now had a file not of just one 24-megapixel shot but 15 x 24 megapixels thereby maximising on the number of pixels and therefore resolution. This was the reason why I shot in portrait orientation – maximum frames to cover the lateral distance. The final file turned out to be around 1 gigabyte; large but still easy enough to handle.

After getting approval of the resulting image from the client, we gave it one more micro inspection to ensure that there were no tiny mistakes in the stitching. The file went to the printers and we held our breath for a few days. This was to be a massive enlargement. With wall art photography the viewer can literally walk up to the print and inspect it – unlike a billboard, which is viewed from a distance.

The printer called us to say that the “wallpaper” had been fitted and that the end result was amazing. We visited the site a few days later to find a delighted client and I have to say we felt so proud. The printer had done an amazing job in printing and fixing the image to the wall. I carefully inspected the work, there was virtually no grain and I could not spot any joins in my stitching work, even though I knew where the joins were.

No need for medium format camera

I think that this is real evidence that, when done correctly, a high quality 24-megapixel camera with a top quality lens can produce staggeringly good quality images even when blown up to be 18m long.  I have over the years considered moving on to medium format but this just proves to me that it is not necessary to go to that expense.

In all honesty the real skill in producing this piece of art was the combination of photgraphy and retouching. Often the retouching element gets overlooked, here it was critical to the success of the project.

Thanks for taking the time to read this wall art photography blog, we hope that you found it interesting. If you would like to see more of our work contact us today.

This site uses Akismet to reduce spam. Learn how your comment data is processed.